Whew what a week trying to get settled into the camp routine! It takes a bit of adjustment to get used to living off of basic amenities in the woods, peeing in an icy cold outhouse, washing your hands in a basin of water that is dirty by 9 am and not changed until the following morning, brushing your teeth with a water bottle, and sleeping in layers and layers of clothes. I’ve had a hard time keeping my journal up-to-date on a daily basis. By the time we finish up for the day and have dinner I am wiped out and ready to sit next to the fire and space out until my hut is warmed up enough to crawl into bed.

Given my lack of adjustment (and sleep) I thought that it would be nice this week to give you all a brief photo introduction to camp to get your oriented to the place I will be living for the next four months.

Squirrel camp consists of two main buildings, the Cook Shack and the Data Hut surrounded by a periphery of individual “huts” or plywood shacks for sleeping that are set back into the woods behind these two buildings.

Here is a nice view of the Cook Shack from the driveway. You can tell we have been busy stacking wood- that is our primary source of heat! 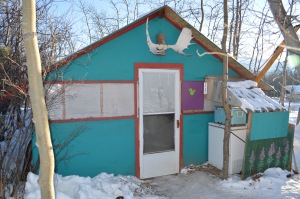 “Front door” of the Cook Shack

Just next door is the Data Hut, which is kept consistently warm using a propane-fed heater. This is where the computers are kept which we use to enter our data as well as where we keep all of our squirrel trapping supplies. Three lucky ducks, Emily, Simon, and Sabrina get to sleep in here and I think are pretty toasty most nights. 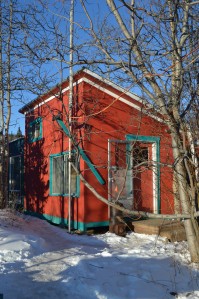 There is also the ‘Jail’ which, I suppose, is a “major” building that I forgot to mention (and take a picture of, I’ll upload that later). We keep our peanut butter in here during the Fall and Winter when we doing a food manipulation and supplementing the squirrels with a kilogram of peanut butter each. As a result it becomes quite a mouse haven during the winter months. Shannon and Hannes are sleeping here and have been plagued by more than a few mouse problems.

This next picture  is not a “major” building but it is a very important one! This is what we call the “dunny” which is the Australian word for “outhouse”. 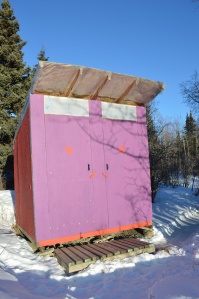 And it has a great view, one of the best from camp! So you can keep the door open while you take a pee…if you so choose.

Lisa and I are staying in the PhD Hut, which is the only insulated hut at camp and also has a small propane fueled heater. 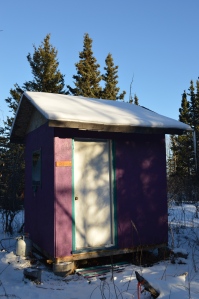 My cozy corner of the PhD Hut

The first night in PhD hut was pretty rough. I had been up here during the fall and had been sweating in my sleeping bag during the night, but I definitely underestimated how much colder the nights were getting in March compared to October. I was quite cold the first night and woke up a lot because of it- not to mention that I had to pee but didn’t want to climb out of my sleeping bag to go outside. There are few things less appealing in the middle of a winter night…

The past couple of nights have been a bit better. It is still difficult to keep my face warm at night without suffocating in my sleeping bag or crystallizing the entire inside of my sleeping bag with ice as my breath condenses on the inner lining. I haven’t figured out a good system yet. My feet were a bit chilly still and I’ve come to realize that my sleeping bag just isn’t cutting it by itself. Unfortunately I unpacked my second fleece blanket at the last minute because my bag was bursting at the seams. What a dumb move. Who cares if my bag was over-stuffed as long as the zippers still closed? So I have turned to using my heavy down coat as a blanket and it is working amazingly well, better than any blanket I could have packed. We turn the hut heater on around 7pm most nights so evenings when we climb into bed are pretty toasty. But we have to turn the heater off before falling asleep and the temperature drops steadily throughout the night. Mornings are by far the worst. By 7 am the hut is freezing. It is so cold that I can’t even force myself to jump out of my sleeping bag, get dressed quickly, and sprint to the cook shack. Instead it is a slow crawl out of bed and the lethargic movement of frozen limbs as I turn the heater on and slowly warm each item of clothing over the flame before pulling it over my base layer of clothing that I will probably live in until spring. Even my glasses get a warm-up before going on my face, which his heaven compared to the shock of cold metal on your ears and nose. Unfortunately PhD Hut is also the furthest from the cook shack so it’s a long cold trek through the early morning. But the worst of it is now past since I’ve put on my icy clothes and everything is gradually heating through from the inside out. But when I reach the cook shack it is still not over as I deposit my water bottle and headlamp and then have to trek back out to the dunny for a long awaited morning pee. This is possibly the second worst part of the morning, undoing all of the layers you just so carefully put on and baring your bum to the icy toilet seat. Who needs coffee? If that doesn’t wake you up in the morning I don’t know what will. There are some days when I think it just might be useful to have a catheter put in for squirrel camp…

But hey! Here is the view of the mountains at sunrise from camp. From the toilet seat of a dunny it doesn’t get much more beautiful than that.

Sunrise over the mountains

One thought on “Welcome to Squirrel Camp”