It is the end of May and very nearly the beginning of June. Elsewhere school is letting out. There are graduations and parties, picnics and BBQs. I can remember Memorial Day weekends in high school marching in wool uniforms in 70-degree weather to the tune of the “Battle Hymn of the Republic”. Now I spend my days freezing in Carhartts and flannel, sitting and watching squirrels for hours at a time. At St. Lawrence the students would be sprawled out on the patio of the North Star Café, sipping iced coffees and chatting with friends behind Gucci shaded eyes. Frisbees would be sailing across the quad amidst the few daring sunbathers and the flow of people to the libraries would swell and ebb as the time for finals came and went, eventually just leaving behind those uncertain, amazing, and exuberant few who would graduate a mere week later. This year marks two years since my own graduation and class graduating is the first freshman class that I ever served as a Community Assistant for. They were the best group of residents I ever had and included some of the best friends I will ever make. I had planned since the day I wished them a happy summer and congratulated them on one year of college completed to be there for their graduation. But life had other plans. 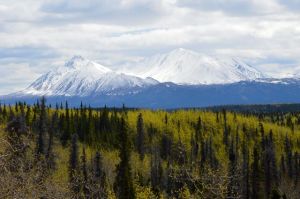 Here time is marked only by the activity patterns of the squirrels and the change in sunlight from daylight to dusk back to daylight again. At midnight the sky still hangs in twilight colors- the sky above bruised blue and purple with just the faintest of color at the edges, enough to make you question whether the sun is actually setting or rising. And the twitter and chirp of the birds, the haunting refrain of the wood thrush and the sweet familiar song of the robin that has heralded every summer morning I’ve known only adds to the mystery of it. You feel as though the day is surely just breaking above the mountain tops and it is the orange tinge of the rising sun you see, not the last remnants of light from a setting one. Hours, days, and even months begin to lose their meaning here. We mark the passing of time through meals and through sleeping and waking, although surely we do little enough of the former. When midnight feels like 8:30 pm your sleep cycles become thoroughly confused. Although I am physically exhausted my brain recognizes daylight and sleepiness does not come until well past the midnight hour. Not a great pattern when the squirrels are up at 6 am. 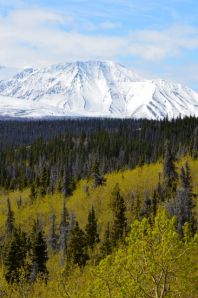 Elsewhere it is verging on summer but here it feels as though we have barely passed the fullness of spring. The trees have yet to lose their bright green coloration but the leaves are unfurled enough to cast dancing shadows on our paths.  More and more I feel torn between the place that I currently call home and the home that I see every day in my mind’s eye. It’s hard to distinguish whether I’m falling in love with the shiver of the wind through the poplars here and the smell of fresh turned earth warming under the sun, or if it is that these sights and smells remind me of the way the woods smell and look this time of year at home. The start of June marks my third full month here and with two more to go I don’t know if I am resigned or excited. There is so much to fall in love with here. The mountains are beautiful but too remote in their beauty. I miss the intimacy of hardwood forests with their hidden streams and lakes.

The past couple of weeks has seen the arrival of yet more people at squirrel camp. Two snowshoe hare researchers, Melanie and Jacob, have arrived with their dog, JD, who has quickly become the beloved camp dog. Most mornings are filled with the chorus of “Hi JD,!”, “Good morning JD!”, “How are you little girl?” often followed many minutes later by a much less excited “Good morning Jacob.”  It is a regular occurrence that I’m sure my dad can relate to every time I come home and spend ten minutes scratching Sirrus’s ears before I give him a hug. See Dad? It’s nothing personal; dogs are just always better than men. 😉 (Except that dogs don’t make you popcorn or provide fresh venison or fish, all things that I am craving mightily at the moment…)

This week we saw our first grizzly and black bears, on the road, thankfully, and not on grid. The two grizzlies that we saw looked like they might be yearlings, although we did not see Mom with them. Most likely she had already crossed the road and headed into the bush. Unfortunately the grizzlies passed by too quickly for a photo. Luckily they have a healthy fear of the road, unlike the grizzly that used to live on one of the study grids just down the road from camp. S/he was found dead this week; most likely hit by a car before running and dying in the woods. The news of “Fluffy’s” death (as s/he was called by the squirrel crew) has hit camp hard. If such can be said of a bear, she was much beloved of squirrel camp.

Last week we spent our lone day off hiking King’s Throne. The mountain is named such because it resembles a throne from the highway. Here is a view of the “throne” looking over Kathleen Lake. 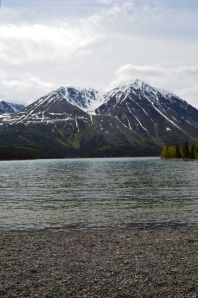 Our hike took us to the “cirque” of the mountain, a fancy term for a steep-walled basin shaped like a half-bowl. In layman’s terms we hiked to the “seat” of the throne. The trail wends around the edge of Kathleen Lake and passes through a spruce and poplar forest before zigzagging up a steep talus slope. Thanks to the switchbacks the trail was slippery but not overly strenuous. Compared to most of the high peak trails in the Adirondacks, which head straight up the mountain, this was a cakewalk. We didn’t make it to the summit of the mountain due to high winds and warning from the Kluane guidebook that indicated that the summit of King’s Throne could be dangerous in windy conditions. However, the view from the cirque looked out over Kathleen Lake and the Auriol Range and was spectacular.  With the summit just within our sights it was a sore temptation but it was meant to be another hike for another day. For that moment and time the cirque was the perfect place to plop down for an hour in the afternoon and soak up the sun and view from on high. And although home is never far from my mind, for that moment it was just far enough.

Our path up the mountain. 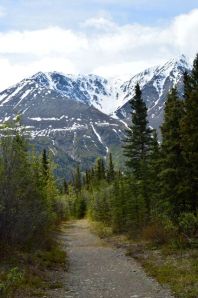 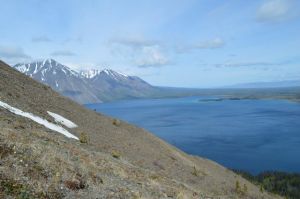 Some of our first views from the slope. 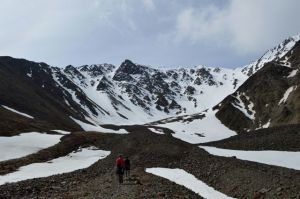 Looking back down as Jess brings up the rear.

View from inside the cirque. 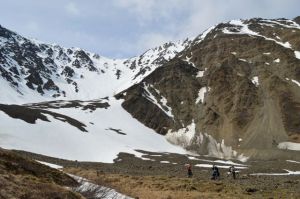 The crew! After a week of not showering I had to force them to stand this close together…

The cirque and me. 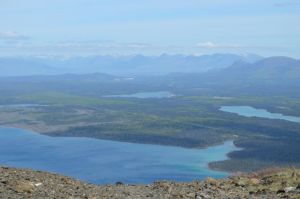 The view from on high, looking out over Kathleen Lake and the Auriol Range. The little “cove” you can see is where we started the hike. 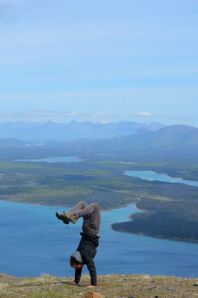 Lisa showing us all up.

Headed back down the mountain.

One last glimpse. You’ve seen this view half a dozen times now but once is just never enough.