A couple weeks ago Emily, Lisa and I decided to hit the road for a mini-vacation. After almost four months at Squirrel Camp we were all feeling a little big desperate to escape the 10 km radius that we work in. Our four day weekend took us along the Top of the World Highway to Dawson City and Tombstone Territorial Park. I will be sharing my adventure here with you in several installments. Most everything I am including I have taken straight from my journal that I wrote along the way, so all of my thoughts and feelings are about as “in the moment” as you can get!

In other news, this week we celebrated the solstice with a 238 km (148 mi) bike relay from Haines Junction, YT to Haines, Alaska. This was the 22nd Annual Kluane Chilkat Bike Relay and it was a blast! More stories and pictures from the race soon to come in the next week or two so stay tuned! Suffice to say I am already planning for next year…

For now let’s hit the road to Dawson!

Tonight was our first night on the road. We left camp around 8 pm and headed northwest along Kluane Lake to Destruction Bay, Burwash Landing, and Beaver Creek. These are names I have heard every morning on the radio until the places have grown to almost mythic proportions in my mind. They are names out of a fable or legend and yet the reality is much more stark. They are tiny towns, marked only by their lone gas station which often doubles as the town’s sole restaurant, bar, and lodge. Nearly abandoned places that seem to exist on the edge of nowhere. You can cup their populations in your palm and they persist as if they might simply vanish at any moment leaving behind only these trace fragments of what once was. Between them the highway winds ever onward, the breadth and depth of the wilderness around it diminished not at all by the winding strip of pavement. If anything the highway serves only to enhance the sense of isolation you are confronted with. The mountains rise and fall away, caught between sunshine and streamers of rain. The jagged snow covered peaks give way to spruce covered slopes that are no less impressive despite their diminished size. From the road the views fall away to open valleys shimmering with rivers and lakes winding through their bowl. And beyond it all the mountains rise and rise again. An occasional abandoned gas station or lodge dots the highway- eyeless and run down, the paint cracked and chipped, the windows boarded across broken panes. They are subtle reminders of the power of the wilderness here. This is not a human’s place and long have we been reminded of it. This is the home of the grizzly and black bear,both of which we saw, three of the former and two of the latter. The last black we saw had cubs- although I was driving and didn’t lay eyes on them. We saw a moose that crossed the road right in front of us, a beaver, and swans.

Our first grizzly on the road. 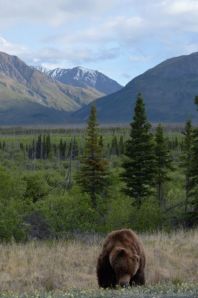 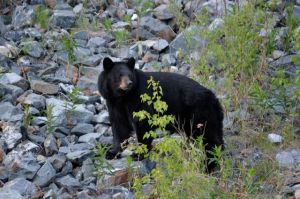 The last black that we saw with cubs. I was driving this leg of the trip but luckily I had the time to put my other lens on the camera and get this nice pic! 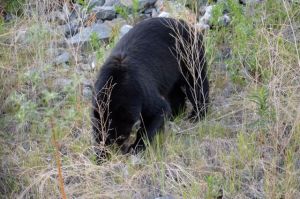 The human remnants are but shadow reminders of the life and vitality here. But this unending wilderness is as frightening as it is exciting. I cannot pretend to be perfectly in love with it, because I am afraid of it too. These vast swaths of untouched wilderness are daunting to the human senses and I feel as though I have stepped into a land where I don’t belong. I am a permitted guest here, but just barely. Mistakes are not easily forgiven by such a irascible host.  Tonight we are in Snag Junction campground. It is 12:29 and I am writing with nothing but ambient light inside the tent. We are truly headed to the land of the midnight sun. 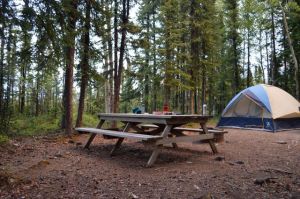